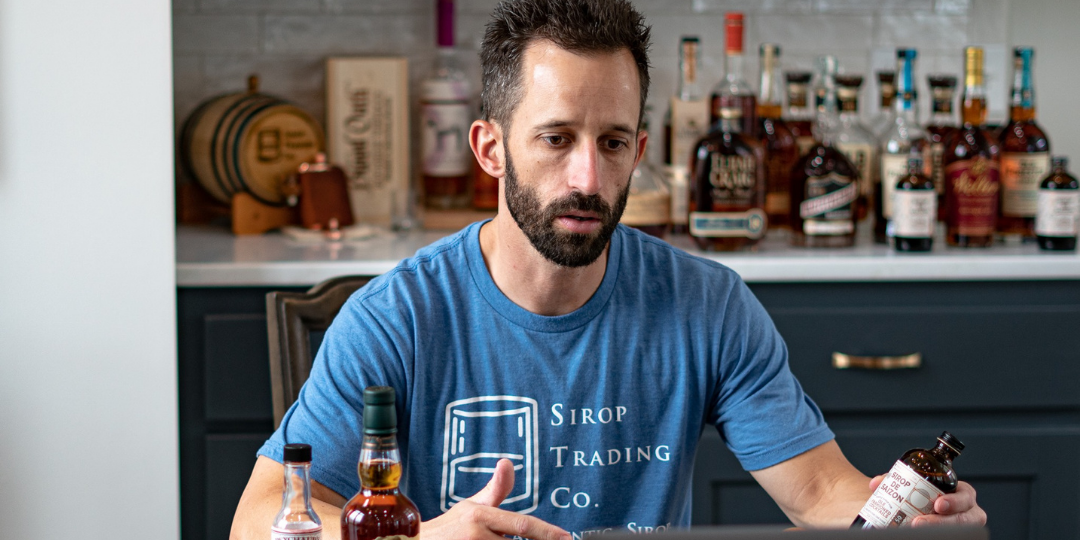 Every whiskey drinker knows that the Old Fashioned is a classic. And as any whiskey enthusiast would say, choosing the right simple syrup is just as important as your choice of bourbon.

So before we get into the story behind this lifestyle cocktail mixer, let's cover the most important question...

Sirop de Saizon is a simple syrup handcrafted in small batches used to make Old Fashioned cocktails. You'll taste notes of toasted molasses, a hint of vanilla bean, and a smidge of nuttiness on the tongue by only adding 1/2oz of Sirop to your favorite bourbon.

Bourbon connoisseur's can choose between Sirop's classic 8oz bottle or their newly released 16oz bottle with a pump if you find yourself needing a little extra on-hand. And yes, that's double the Sirop for double a good time (just remember to pump responsibly).

Here's What They're Saying About Sirop

Although this cocktail mixture speaks for itself, see what customers are saying:

“No bitters in this product….thank goodness! I like to have some bartending freedom when making cocktails so the all in on solutions are not for me. This however is spot on awesome!”

“So simple and so good! Where has this been all my life?”

“So much more than a simple syrup. The vanilla bean and molasses combo are dialed in perfectly!”

So what are you waiting for? With Sirop De Saizon, you're guaranteed a good time, so add it to your mixer repertoire and enjoy the sweet taste of New Orleans wherever you may be!

Born on the Streets of NOLA

To fully explain how Sirop de Saizon was born, we will have to take you back to 2009 when the creator, Alex Saizon, was sent to the grocery store by his wife.

Her request was for him to pick up all the ingredients to make a traditional Louisiana classic gumbo, but then he seemed to wonder off down the whiskey aisle.

This is where he came across a bottle of Maker's Mark Whiskey.

The decision for Alex's first bottle of bourbon was made quite easily amongst the various options sitting on the shelf.

At first glance, the glossy red wax dripping over the tall glass stem was an authentic and unique work of art. Dipped by hand, it flowed down to a stout, square base, which was wrapped with a rich and crisp almond-colored paper that could only be cut from an early 1900’s era piece of antique machinery that found its home in the heart of Kentucky.

As his eyes moved past the label, he noticed the bottle was filled with the most beautiful bronze and molasses-colored liquid that he'd ever seen.

After gathering the proper southern Louisiana gumbo ingredients, Alex headed home. Upon arrival and beaming with pride regarding his newfound prize of 94 proof Kentucky straight bourbon, the next step was to figure out what to do with it.

Should he drink it straight? Maybe add some ice or make it a cocktail? Well, if he made a cocktail, which cocktail should he make?

After some quick googling of bourbon cocktails, it became apparent that the whiskey Old Fashioned was one of the most well-known and renowned cocktails to make with any type of bourbon or rye whiskey.

That night and over the next eight years, Alex spent many Friday and Saturday nights, the occasional Tuesday evening, and even a few Wednesdays mixed in here and there, perfecting the Old Fashioned cocktail in his own way.

Along the way, different bourbons and rye whiskeys were tried. Different variations of bitters, muddling of oranges, garnishing with a cherry or two, and even starting with a simple sugar cube were all ways Alex would craft an Old Fashioned or two for himself and anyone who would enjoy one with him.

After years of tinkering, it was apparent that he would have to take matters into his own hands.

The FIRST batch of sirop

In the fall of 2017, during a trip down to the Big Easy, Alex and his wife ordered an Old Fashioned at one of the many unique and authentic bars you can find on the historic streets of New Orleans. At this very moment, the next step on his journey to Old Fashioned bliss was set in stone.

So, upon returning home, Alex did what any sensible Cajun man would do. He made himself a drink, grabbed a multitude of ingredients, and went into the kitchen to begin crafting the first batch of Sirop.

Getting it just right

It couldn’t be too thick or too thin, and it must mix well and stay blended with the whiskey. Rich cane sugar couldn’t be the only driver of sweetness, so toasted molasses and vanilla bean were dispatched to add complexity and complement the already desirable tasting notes of quality bourbon.

Sirop couldn't be allowed to take over the cocktail. Instead, a bourbon forward Old Fashioned must be the final product, so he blended his secret recipe accordingly. It took nearly two years and many Old Fashioned's to get the recipe just right.

Finally, in late 2019, Sirop de Saizon was launched in one single store in the heart of Lafayette, LA. To Alex's amazement, over the next few months Sirop sold at a record pace!

The support and genuine enjoyment of Sirop by whiskey drinkers inspired Alex to go all in and spread the flavor of Sirop de Saizon even further, one Ole Fashioned at a time.

Growth and evolution are something that the team looks forward to, but there is one thing that will never change - Sirop will always be made by hand in small batches using only the finest quality ingredients that can be found!

As of early 2022, Sirop is still made by the hands of Alex Saizon and the crew at Sirop Trading Co. They have produced over 19,000 bottles of Sirop, and it is now available in over 225 retail locations in TX, LA, MS, FL, and SC.

Of course, you can also find it on Amazon for all of you Prime junkies out there! Speaking of Amazon...

Are you Buyin' or sellin'?

Whether it's old fashioned cocktail mixer to cajun seasoning rub, we're a one-stop-shop to all things Cajun Creole. Learn more about how to get involved by reading more below!

Cajun Creole Market is your central hub for all things cajun! We love being able to share Louisiana products from our online shop with customers across the United States. This convenient way saves time to both client and customer.

It was established to make it easy for people from all around the world to share in Louisiana's distinctive culture through its delicious food and unique goods. There's something here to suit every taste and budget, whether you're looking for mouthwatering recipes or authentic Cajun seasoning. All of our products are sourced from local, Louisiana-owned businesses.

Cajun Blast: Made by Cajuns for Everyone

This story begins with two brothers from South Louisiana and a couple of grocery stores. Find out how Cajun Blast came to be and how you can now get...

Every whiskey drinker knows that the Old Fashioned is a classic. And as any whiskey enthusiast would say, choosing the right simple syrup is just as...

How to Increase Revenue with Amazon Sales

At Cajun Creole Market, we use Amazon and our marketing network to promote locally-owned products and want to share with other local businesses how...