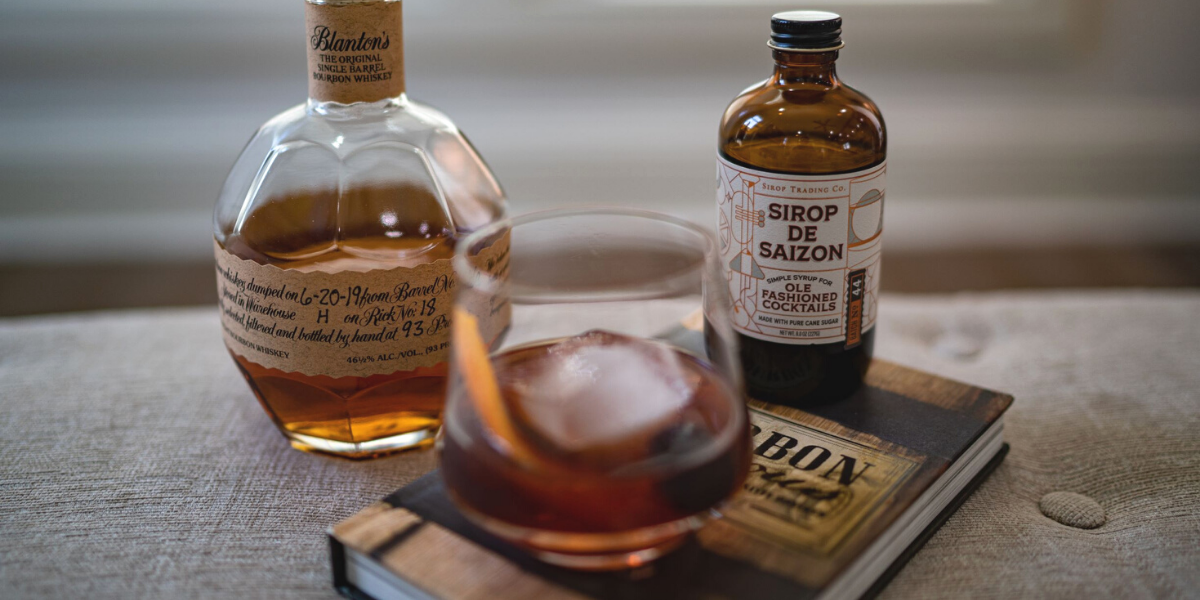 Certainly, for our whiskey enthusiasts, the Old Fashioned is a classic. And as any real whiskey drinker would know, choosing the right simple syrup is just as important as your choice of bourbon.

born in the big easy

Sirop de Saizon is a fresh take on New Orleans' already fascinating culture. It was inspired by the many unique and authentic bars that the city has to offer, as well as its distinctive heritage.

Sirop de Saizon is a simple syrup based with notes of molasses, a bit of nuttiness, pure cane sugar and finishes with a hint of vanilla bean on your tongue. Sirop de Saizon is only made in small batches, with the bourbon and rye whiskey connoisseur in mind.

The story of Sirop begins in 2009 when creator, Alex Saizon took a trip to the grocery store for ingredients to make a gumbo. While passing through the liquor aisle, the tall, red wax-dripped glass stem really struck his attention. It was in this moment that Alex purchased his first bottle of bourbon.

Purchasing bourbon can be very intimidating in itself, but knowing how to make a good drink is also important. As a first timer, Alex took to Google to find cocktail recipes best for Maker's, when he came across the Old Fashioned. Using different bourbons, rye whiskey and different variations of bitters and muddled oranges, Alex spent the next eight years perfecting his own Old Fashioned drink.

In 2017, Alex was in New Orleans and ordered an Old Fashioned at a local bar. It was in his first sip that he knew exactly what he needed to make the perfect drink. It took Alex nearly two years (and many Old Fashioned’s later) to perfect the Sirop recipe.

In late 2019, Sirop de Saizon launched in only one small store in the heart of Lafayette, LA. Over the course of the year, to Alex's amazement, Sirop was selling at a record pace! Because of the overwhelming support and enjoyment of Sirop by whiskey drinkers, Alex was inspired to spread the flavor of Sirop across the world, one Old Fashioned at a time.

To differentiate Sirop sweetness from other simple syrups, Alex added toasted molasses and vanilla bean to complement the already desirable tasting notes of quality bourbon. The process took nearly two years and a lot of trial and error, but his secret recipe turned out to be the bourbon forward old fashioned he had hoped for!

The foundation of Sirop De Saizon is made of three key ingredients: (1) molasses (2) pure cane sugar and (3) vanilla bean. We utilize a proprietary blend of these ingredients in perfect harmony with a few other items along with patience and just the right amount of heat to bring you a consistent and flavorful product that finds its home on your bar.

Although our Sirop ain't simple, making an Old Fashioned can be simply made! Here's how:

To some people, Bourbon might be just a drink. But to others, Bourbon is a lifestyle. Whether you're a Bourbon connoisseur or newly getting into the business of Bourbon, you're co-star ingredients are necessary to make the perfect Bourbon cocktail.

So, to our friends and fellow Bourbon enthusiasts, see what customers are saying about Sirop de Saizon:

...really enjoying the Sirop de Saizon. Put me down for another bottle when you do your next batch!

I’m being dead serious when I say this is one of the best ole fashioned's I've made. I love the consistency of the Sirop and the flavor....

Happy hour is no longer limited to late afternoons! Shop for Sirop De Saizon at Cajun Creole Market, open 24/7, to enjoy the sweet taste of New Orleans wherever you are!

Cajun Creole Market is your central hub for all things cajun! We love being able to share Louisiana products, like Cajun seasonings and Cajun recipes, from our online shop with customers across the United States. This convenient way saves time to both client and customer.

It was established to make it easy for people from all around the world to share in Louisiana's distinctive culture through its delicious food and unique goods. There's something here to suit every taste and budget, whether you're looking for mouthwatering recipes or authentic Cajun seasoning. All of our products are sourced from local, Louisiana-owned businesses.

Interested in selling your Cajun-made products on Cajun Cajun Creole Market? Our network includes the big dogs, like Cajun Blast and Sirop Trading Co. We promote your products on cajuncreolemarket.com, market them through our "Cajun" network, and provide solutions using Amazon sales.

At Cajun Creole Market, we love sharing our recipes with those of you at home! Using the same products we offer, our recipes, are pretty simple and...

The name says it all. Cast Iron Cajun's seasonings and delicious cast iron recipes are what you call "Cajun finger lickin' good".